In Muller’s debut novel, the story revolves around 16-year-old Daniel Thatcher and his troubled life that takes as unusual turn into the paranormal realm.

The Millennium Series is a commentary on the state of the justice system and all that Larsson loathed in his personal and political life – racism, sexism and forms of abuse. The Girl Who Played with Fire is the second installment in the series.

Review: 7 Vows of Marriage – An Interesting Take On The Nuptial Knot

The best moment was when I put the book down and vowed never to pick it up again or ask anyone else to read it. Also, that photo represents exactly how flat the book fell, in my opinion. Put your safety glasses on, this is about to get messy.

Read more Review: 7 Vows of Marriage – An Interesting Take On The Nuptial Knot

I completed a year of reading solely non-fiction, from June 2016 to June 2017. I did so because fiction had taken over my shelf and my mind. Building a habit is always difficult, but it isn’t impossible. 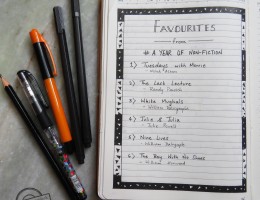